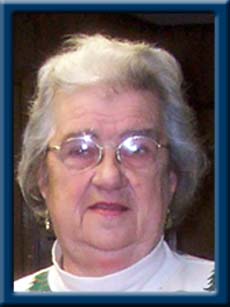 KNOX – Myra Roberta, 82, of Brooklyn, Queens County, passed away peacefully in Queens Manor, Liverpool, on Sunday, April 16, 2017 with her family by her side.
Born in Mill Village, Queens County, she was a daughter of the late Lawrence and Dorothy (MacKinnon) Anthony.
Myra was a former nursing assistant working in Queens General Hospital, Liverpool in her early years. She loved spending time at her cabin with family and friends. She will be sadly missed but lovingly remembered by her family especially her grandchildren and her great grandson who stole her heart.
Myra is survived by her daughter Sheila (Gordon) Munroe of Port Medway, her grandchildren Stephen (Kristy) Munroe of Dartmouth, Brian Knox (Erin) of Chester and Jennifer Knox of Halifax and her great grandson Horatio Wear.
She was predeceased by her husband Gerald and her son Victor.
At Myra’s request, her body has been donated to science. A private family interment will be held at a later date following cremation. Donations in Myra’s memory may be made to the IWK-Grace Hospital, Halifax or to the Medical First Responders Port Medway Fire Department. Online condolences may be made to www.chandlersfuneral.com.

Offer Condolence for the family of Knox; Myra Roberta