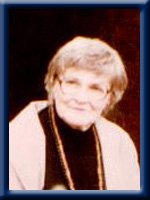 It is with a deep sense of loss that the family of Dorothy Evelyn (Mulhall) Killam, of Liverpool, NS announces her passing, on March 6, 2011. Born in Liverpool to the late Edgar A. and Mary E. Mulhall, she died peacefully with her daughter Kathryn by her side, at Queens General Hospital, just two months short of her 98th birthday.

Dorothy’s growing up years were full and happy, filled with tennis, swimming, sailing, dancing, music and many friends. These were precious and memorable years, of which she has written many personal and historical stories for her local newspaper. She graduated from Horton Academy and entered Acadia University class of ’35, a time cherished, for the rest of her life.

She met and married the dashing and devilish Bill (William E.) Killam from Yarmouth, NS and not long after, the handsome young couple found themselves in the middle of a war against Germany and like everyone else, they pitched in ‘to do their bit’, Bill became an officer in the Merchant Navy, Dorothy joined the St.John Ambulance and for the next four years, they saw little of each other, savoring every moment and every leave that came their way..

Years later, she spoke with great pride of the work she did, especially when relaying the story of the hundreds of frozen and wounded soldiers brought ashore from a sunken war ship just off our coast, who were placed in schools, in Liverpool and nearby towns. “We sat with them night and day, bathing their frozen limbs, first in cold, then gradually warmer water…ours (Liverpool) were the only ones not to lose a limb”. Later, while stationed in Sydney, she became a VAD with the Red Cross, serving Sydney Hospital and the military hospital, as the head dietian.

Family was everything to Dorothy and the rest of her life was spent taking care of hers. She lost two, full term baby boys and raised two children, Kathryn Lyle (currently of Liverpool) and David Lloyd (Beamsville, Ont.), all the while caring for two elderly parents and a husband with early onset Parkinson’s Disease. These were demanding and difficult years, which she met with strength and style, as all who knew her will confirm.

Her ‘place of her own’, her sanctuary outside the demands of making ends meet and the care of others, was in music and she filled her heart and those of others with her powerful, beautiful metzo soprano voice. A member and soloist with the well-known Queens Chorale and also the choir at Zion United Church, she is still remembered as an important part of our musical heritage, here in Queens County.

Dorothy also had a ‘view of her own’, which often led her down new and socially unfamiliar paths of thinking. In the early 1970’s, she was one of the founders of our local branch of the Canadian Association for the Mentally Challenged, a founder and board member of the Drug Dependency and Mental Health Association, as well as the FISH Help Line.

A long time member of the Queens County Historical Association, Dorothy (and others) can take credit for saving the Fort Point lighthouse and for encouraging the RBC to rethink their ‘modern’ plans for their new bank and to build a replica of the original building instead. She was a member of the South Shore Literary Club and like her mother before her, loved literature and wrote poems, a few of which were published.

Dorothy was a life long member of the United Church of Canada and took on various roles, at Zion United Church. She served as a Member of Session, on the Board of Management, as an Elder, a choir member, to name a few. Always curious, always wanting to dig deeper, she was on several discussion panels and sought always to find something new in something old and accepted.

Despite the stresses and strains that life can offer up, Dorothy put her best foot forward and found much joy in living and the world around her. Her love of flowers and nature in all its forms, gave her great pleasure and for those who knew her well, she will live on in the sight of a bird flying overhead, in the scent of a delicate flower, in the sound of the wind, in the shape of clouds, in plants & shells washed up along the shoreline or simply in the way a piece of tall grass falls over and lands upon a rock. Mary Frye’s well known 1932 poem could have been written just for her.

Dorothy was a curious, courageous and compassionate woman. She had a quick mind and a wicked sense of humor right up till the end. She saw good in people, when others did not. She saw opportunities where others saw obstacles. She saw the importance of forgiveness and found the grace to forgive, where others still cannot. In her own small way, Dorothy made a difference in this world and for many, the world will be a much smaller place without her

Thank you to the folks at Stonehaven Lodge, Port Mouton, especially Tim and Gloria, who cared for Dorothy like she was family, often going way beyond what was expected and for making her last years, safe and happy ones. Thanks to all the homecare ladies and the V.O.N. who she came to know well. Thanks to cousins Randi, Shaune and Pat who kept vigil with her daughter Kathryn, each night until she passed on.

A celebration of Dorothy’s life will be held on Saturday, May 21st, at Zion Church, Main Street, Liverpool, at 2pm. Family and friends will gather to honour her life with a musical tribute to her days in the Queens Chorale and the church choir. Terry Hurrell, Robert Mills, Kris Snarby, Lesli  Chandler to name a few, will perform songs that Dorothy loved. A reception will follow at the church. Wildflowers, photos and memories are welcome. For information on how to make a contribution to the music festival in Dorothy’s name, please email klkillam@eastlink.ca

Offer Condolence for the family of Killam (Mulhall); Dorothy Evelyn