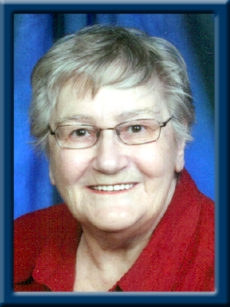 Kennedy – Elizabeth Edna “Betty”, 89, of Liverpool, passed away peacefully on Saturday, October 31st, 2020, in Queens Manor, Liverpool.
Born in Saint John, New Brunswick, Betty was a daughter of the late Capt. Charles and Florence (Bagnell) Williams.
Bridge has been the center of mom’s life for the past 70 years. She met Forbes at a bridge game
at Acadia. We used to say if she stopped playing bridge, we would get worried. Because of COVID 19 restrictions, Mom was unable to play with her Tuesday bridge group, (which included as many stories as hands of bridge) and the Friday afternoon Seaside Bridge Club. Family was very important part of Mom’s life especially grandchildren and great grandchildren. She always had birthday and anniversary dates at her fingertips. She was the family historian and a limitless source of Liverpool history. Mom’s hobbies over the years included gardening, bridge, knitting, crocheting, Mexican train, jig saw puzzles and the daily crossword and sudoku.
Betty is survived by her children; Karen (Charles) McGee of Liverpool, Bill (Linda), of Vernon, BC, Carol (Fred) Beattie, of Dartmouth, Heather (Dean) Clarke, of Vernon, B.C.; Steve of Nelson, B.C. Eight grandchildren, sixteen great grandchildren and her sister Barbara Porter of Sarnia, ON.
Besides her parents, Betty was predeceased by her husband, Forbes, her daughter Kathryn Marrs and her grandsons Joshua Kennedy and Adam Murphy.
Cremation has taken place under the direction of Chandlers’ Funeral Home, Liverpool, NS. A graveside memorial service will be held at a later date. No flowers, donations may be made to a charity of your choice. Online condolences may be made to www.chandlersfuneral.com
Thank you to the staff of Queens Manor and Shoreham Village, Chester for their care and respect given to Mom.

Offer Condolence for the family of Kennedy; Elizabeth Edna “Betty”