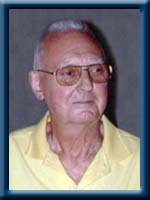 KEMPTON – Millard Edwin,  83, formerly of Liverpool, passed away peacefully with his family by his side on August 17th, 2012 in Shannex Ryan’s Hall, Bridgewater.

Born in Milton, he was son of the late Joseph and Jessie (Hartlen) Kempton.

Millard completed his grade 12 in Milton and worked part time for Milton Nurseries with Alpheus Smith. He then worked for a time with Steel and Engine Products Limited (STENPRO) for a few years followed by six months in Goose Bay as an oil burner mechanic. He returned to Halifax to complete his machinist trade and later worked for Bowater Mersey Paper Company in Brooklyn as a machinist for 36 years until his retirement. Outside of work, Millard enjoyed the outdoors in his younger years; hunting, fishing, camping and boating. He also enjoyed going to dances, working in his basement on “projects”, playing solitaire and reading. He was a former member of the Liverpool Curling Club and enjoyed meeting with friends at the club for morning coffee as well as watching the sport on TV. He was a former volunteer fire fighter with the Liverpool Fire Fighters Association and a former member of Local 141, Canadian Paperworkers Union.

He is survived by his wife of 61 years, Shirley (Hollands), whom he met while bicycling around Milton.  His daughters Rebecca (Scott) Tanner of Lunenburg, Barbara (Brian) Fralic of Port Mouton and his son John (Valerie) of Beach Meadows. His grandchildren April, Joey and Elisha Tanner, Morgan Kempton and Nicholas and Jessica Fralic. Great grandchildren Austin and Jordan Tanner and Ryleigh, Chloe and Brodee Kempton.

Cremation has taken place under the direction of Chandlers’ funeral Home, Liverpool. A celebration of Millard’s life will be held  in Shannex Ryan’s Hall in Bridgewater on Monday, August 20th, 2012 from 2 until 3:30 pm. A private family interment will take place at a later date in Trinity Anglican Cemetery, Liverpool. Reverend Judy Cross officiating. No flowers by request, donations may be made to  Queens Branch S.P.C.A. or to Ryan’s Hall Recreational Fund, P.O. Box 313, Hollingsworth Drive, Bridgewater, NS, B4V-O8A. Online condolences may be made to www.chandlersfuneral.com

Offer Condolence for the family of Kempton; Millard Edwin