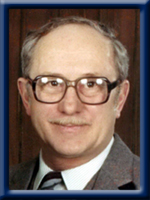 It is with sadness that we announce the passing of Harvey Minard Kempton on Thursday, June 5, 2014 in the Veteran’s unit of Fisherman’s Memorial Hospital, Lunenburg.

Born in Milton on December 9, 1925, he was the eldest child of the late Thaddeus S. and Roberta D. (Minard) Kempton.

Harvey attended Milton School, worked for Mersey Paper Company for one year and, in 1943, at the age of 17, joined the Royal Canadian Air Force where he proudly served his country for the duration of World War II. Following his discharge in 1946, he returned to Mersey Paper Company where he continued to work in the paper industry until 1987 when he retired with the position of papermill superintendent and 44 years faithful service.

He was predeceased b y his wife of 64 years, Florence “Roberta” (Robart); infant brother Gerald and brother Ralph.

Cremation has taken place under the direction of Chandlers’ Funeral Home, Liverpool. A private graveside memorial service will be held at a later date in Pine Rest Cemetery, Greenfield. No flowers. Donations may be made to the Chelsea United Baptist Church Sunday School or the Nova Scotia Lung Association. Online condolences may be made to www.chandlersfuneral.com

Offer Condolence for the family of Kempton; Harvey Minard