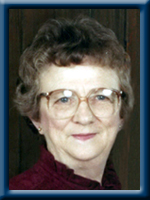 KEMPTON – Florence Roberta. It is with sadness that we announce the passing of Florence Roberta Kempton of Liverpool on Saturday, April 12, 2014 in Queens General Hospital.

She was born in Greenfield, Queens County on July 15, 1923, the eldest child of the late Carmon and Nina (Meister) Robart.

As the years unfolded, Roberta became a dedicated daughter, sister, school teacher, wife, mother, home-maker and friend to all. A graduate of the Provincial Normal College, Truro, she was a highly regarded school teacher in Nova Scotia for many years; the last ten of which were in Liverpool. Her love of life and optimistic nature sent her in many directions with the helping of others being her foremost concern.

The Nova Scotia Lung Association was one of the organizations of which she was a long time volunteer and received honors for her dedicated services at both the local and provincial levels. As a long time member of Gorham Chapter I.O.D.E., she was an avid worker in the group’s undertakings both locally and provincially. Her interest in crafts led to being a co-founder, co-owner and treasurer of Clay Corner Crafts which occupied twenty-five years with the pleasures of creating, producing and selling of clay products.

Roberta is survived by her husband of 64 years, Harvey Minard, her sons David of Greenfield and Jamie of Waterloo. Her sisters Joyce Smeltzer of Sudbury, ON and Audrey (William) Beck of Dartmouth. Her brother Terrance (Joan) Robart of St. John, NB. Her granddaughter Krystal, grandson Benjamin and great grandson Stacy.

She was predeceased by her sister Pauline Steffens, brothers Vance in infancy, John and Robert.

Cremation has taken place under the direction of Chandlers’ Funeral Home, Liverpool. At Roberta’s request, funeral service will be held at a later date. No flowers by request, donations may be made to Greenfield Sewing Circle, Chelsea United Baptist Church Sunday School or to the Nova Scotia Lung Association. Online condolences may be made to www.chandlersfuneral.com

Offer Condolence for the family of Kempton; Florence Roberta