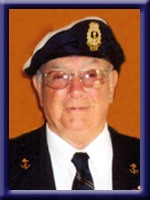 Born in Cobalt, Ont., he was a son of the late Bernard and Gladys (MacKenzie) Kelly.

Ralph was a veteran of the Second World War serving with the Merchant Navy and the Royal Canadian Navy in the North Atlantic. He received the 1939 – 1945 Star with France and Germany clasps, the Canadian Volunteer Service Medal and clasp and the War Medal 1939 -1945. He was a former employee with Bowater Mersey Paper Company Limited, retiring after 35 years as papermaker. He enjoyed tole painting and gardening in his spare time. He was a member of the Mersey Branch # 38, Royal Canadian Legion, Liverpool.

He was predeceased by his first wife of forty-nine years Patricia (Waddleton), his second wife Donna Raynard, an infant sister and his brother John “Jack”.

Cremation has taken place under the direction of Chandlers’ Funeral Home, Liverpool, where visitation will be Tuesday, August 12, 2014 from 10:00 until 11:00 a.m. A legion memorial service will be held at 11:00 a.m. followed by a memorial service. Father Keith Billard officiating. A private family committal will be held at a later time. Family flowers only, donations may be made to any charity. Online condolences may be made to www.chandlersfuneral.com

Offer Condolence for the family of Kelly; Ralph Alden