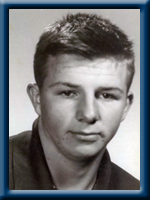 Kenny joined the Military in 1964 and was stationed in Trenton, Ontario for most of his career, before transferring back to Nova Scotia, where he retired in 1975 due to medical reasons. In his younger years, Kenny enjoyed playing many sports with baseball and soccer being his favorites. He enjoyed his family, reading his Bible and most recently spending his time at his cottage on Lake Mush a Mush.

He was predeceased by an infant sister, Linda Lou.

Visitation will be held on Tuesday, May 5th, 2015, from 7:00 – 9:00 p.m., at Chandlers’ Funeral Home, Liverpool. A Graveside Service will be held on Wednesday, May 6th, 2015, at 2:00 p.m., from Pine Grove Cemetery, Vogler’s Cove. Reverend Bonnie Baird officiating. Family flowers only. Donations may be made to St. Andrew’s Anglican Church, Brooklyn or to the Nova Scotia Heart and Stroke Foundation. Online condolences may be made to the family at www.chandlersfuneral.com

Offer Condolence for the family of Keddy, Kenneth Lloyd Sr.