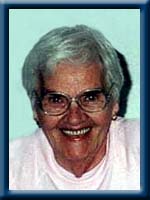 Born in Broad Cove, Lunenburg County, she was a daughter of the late Wilfred and Flora (Forbes) Teal.

Evelyn will be fondly remembered as a friendly, caring person who loved her family, her friends and cats.

She is survived by her daughter Susan (Lou) Krasny of New Market, Ont.; her sons Kenny (Dianne) of Liverpool and David Porteous of Vogler’s Cove. 7 grandchildren and eleven great-grandchildren. Her brothers Gerald of Bridgewater, Melvin of  ON.; Malcolm of Port Dover, ON.; Harold of Wileville.

She was predeceased by her husband Victor; her daughter Linda Lou and an infant daughter. Her sisters Joan, Dorothy Hynick and Audrey Apted. Her brother Gardner.

Visitation will be this evening (Wednesday, February 13th, 2013) from 7 until 9 p.m. and funeral service will be Thursday, February 14th, 2013 at 10:00 a.m. both in Chandlers’ Funeral Chapel, Liverpool. Reverend Judy Cross officiating.  Burial will be in Pine Grove Cemetery, Vogler’s Cove. Family flowers only, donations may be made to the Alzheimer Society of Nova Scotia or to Queens Manor, Liverpool. Online condolences may be made to www.chandlersfuneral.com

Offer Condolence for the family of Keddy; Evelyn Ruth