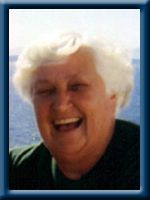 Born in Beach Meadows, she was a daughter of the late Kenneth and Felicia (Gaetz) Chandler.

Alethia worked at the Tuna Inn in Hunt’s Point, Ike Seaman’s canteen in Sandy Cove then went to work at the Best Yeast Plant (Standard Brands Ltd.) in Brooklyn for 16 years. In 1979, she went to work as the Rural Mail Courier out of the Brooklyn Post Office. Later she transferred to the Liverpool Post Office, where she worked for almost 30 years until her retirement. She looked forward to talking to the customers each day on the mail route.

Alethia was an active member of her community and Emmanuel United Church in Beach Meadows where she taught Sunday School and sang in the Choir. She was a Cub Leader for many years which she always enjoyed. In her spare time, she enjoyed oil painting, making jewelry and flower gardening. She will be fondly remembered as a loving mother and devoted grandmother and a great listener to those in need. She also loved her dog Holly.

She was predeceased by her husband Leonard Michael “Mick” and her brothers Walter and Aubrey.

Cremation has taken place under the direction of Chandlers’ Funeral Home, Liverpool, where funeral service will be held Tuesday, October 21, 2014 at 2:00 p.m. Reverend Karen Orht officiating. Burial will be in Beach Meadows Cemetery. Family flowers only, donations may be made to the Beach Meadows Cemetery Fund. Online condolences may be made to www.chandlersfuneral.com  “I love you more than more.”

Offer Condolence for the family of Keating; Alethia Irene