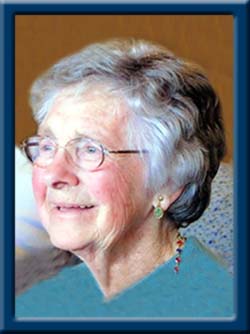 Edna Shirley (Stuart) Kean, 89, died peacefully Oct. 23, 2015, in Queens General Hospital, Liverpool. Born in Central Port Mouton, she was a daughter of the late Stanley and Vera (Wyatt) Stuart. Always generous, kind and thoughtful, a consummate friend, Shirley maintained lifelong relationships with people from her early school days,  church in Port Mouton, Atlantic Photo Supply (her first job in Halifax), Bethany United Church, neighbours, bridge-playing pals and other card lovers. She made her first foray to Halifax at age 16,  riding by bicycle from Port Mouton with another adventurous soul to visit a friend. She had fond memories of working at  White Point Lodge in her teens.  She loved  dancing, playing piano, knitting,  and the daily cryptoquote.  She volunteered at the IWK while raising her family in Halifax until she and her husband Don (who died in 1999) retired to Port Mouton. She is survived by son, Tom (Lynnette), Port Mouton; daughters, Jennifer and Lynn, Halifax; sister Jean Smith, Port Mouton; grandchildren, Ben (Megan) Kean and Julien Carette-Kean; great-grandchildren Camden Martin Carette , twins Marshall and Wilson Kean; special nieces Lorna (Peter) Greenslade and Janet (David) Spicer;  many nieces, nephews, great-nieces and great-nephews, including Bethany, Andrew and Jacob Greenslade; cousin Claire Colp, Liverpool. Thanks to Tim, Gloria and the women at Stonehaven Lodge who cared for her during her year-long stay. Funeral will be 2 p.m. Wednesday  in Chandler’s Funeral Home, Liverpool; reception to follow. Interment will be in Peaceful Hill Cemetery in Port Mouton at a later date. Donations  can be made to Port Mouton United Baptist Church, the VON  or charity of choice. Online condolences at www.chandlersfuneral.com

Offer Condolence for the family of Kean; Edna Shirley