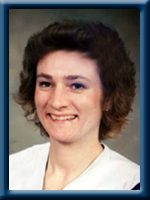 It is with great sadness the family of Tina Louise Joudrey announce her passing on January 18, 2014 in Quebec after a courageous battle with cancer.

Born in Liverpool on March 13, 1959, she was a daughter of William and Ruth (Dauphinee) Joudrey of Timberlea.

Tina was employed as a highly skilled Marketing and Sales Representative who loved her job and got to see much of Canada and the U.S. during her career. She was a former member of the West End Baptist Church on Quinpool Road in Halifax before she moved away. Tina loved Nova Scotia and came home as often as she could to visit family and friends. She will always be remembered as a sweet, loving daughter and mother and will never be forgotten by her family or friends.

Surviving besides her parents are her daughter Melissa Joudrey-Mallette her son Christian Joudrey-Mallette (Eliane Dion-Saindon) both of Brossard, PQ,  her sister Jill (Perry) Armstrong of Timberlea, her brothers William Jr. of Buckfield, Dale of Vancouver, BC, Peter and Paul, both of Timberlea.  Her uncle Russell Dauphinee of Blind Bay, cousins Fred (Heather) Dauphinee of Massachusetts.

Visitation will be Tuesday, January 28, 2014 from 10:00 a.m. until 11:00 a.m. and funeral service will be 11:00 a.m., both in Chandlers’ Funeral Chapel, Liverpool. Reverend Steven Hopper officiating. Burial will be in Liverpool United Baptist Cemetery. Family flowers only, donations may be made to Canadian Cancer Society. Online condolences may be made to www.chandlersfuneral.com.

Offer Condolence for the family of Joudrey; Tina Louise