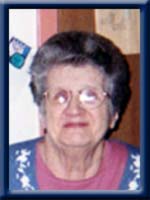 Born in Milton, Queens County, she was a  daughter of the late Clifford and Annie (MacKinnon) Dexter.

In her earlier years, Thelma worked as a cook for Hillsview Acres in Middlefield and at the former Fahie’s Nursing Home in Liverpool. She also worked for a shoe factory in Milton. She loved to garden, fish and to knit. She was recognized for her volunteer effort for knitting mittens for those in need.

She was predeceased by her husband Raymond, her daughter Christine , her granddaughter Vicky and grandsons Wade and Harvey. great-granddaughter Robin, her sisters Margaret, Thelma and Phyllis and her brothers John, Sydney, Francis, Curtis, Marsdon, Joseph, Rosevelt, John and Dean.

Visitation will be Friday, March 29th, 2013 from 7 until 9 p.m. and funeral service will be Saturday, March 30th, 2013 at 2:00 p.m. both in Chandlers’ Funeral Chapel, Liverpool. Reverend Victor Adams officiating. Burial will be in Pine Rest Cemetery, Greenfield. Family flowers only, donations may be made to North Queens Nursing Home, Caledonia, Heart and Stroke Foundation of Nova Scotia or the Canadian Diabetes Association. Online condolences may be made to www.chandlersfuneral.com

Offer Condolence for the family of Joudrey; Thelma Mae