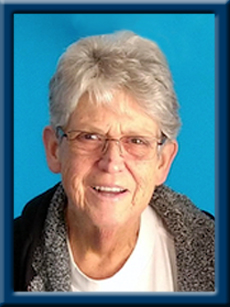 Marcella was born November 3, 1948 in Bridgewater, at the Dawson Memorial Hospital, the youngest child of the late Dawson Melbourne and Jean Winnifred (Burke) Publicover. She married the love of her life Larry Carver Joudrey, July 8, 1972. Marcella was a retired member of the Nova Scotia Nursing Association, first training as a Certified Nursing Assistant (C.N.A.) at the Nova Scotia Sanatorium in Kentville, and then going on to post grad training at the Halifax Infirmary for Operating Room Technician. (O.R.T). This led her to work in the Operating room at the Fishermen’s Memorial Hospital in Lunenburg.

Marcella loved being surrounded by her family and friends and cherished every visit. She was an avid note-taker, never passing on a scrap of paper big enough to jot a reminder on. She loved all kinds of handiwork and her joy was in that of giving these items away to her family and friends. Having learnt the basics of sewing from her mother-in-law, she began by making aprons and other items for the Greenfield Sewing Circle seasonal Tea & sales. In her early sewing years she completely outfitted a wedding party including the Bridal Gown and Ring Bearers Pillow, and it was at this time she was also acting as her sister’s personal seamstress creating new outfits for her daily work attire. She tried her hands at almost anything over the years from ceramics to leatherwork and everything in between, having projects on the go in every room of the house and being known to carry a crochet hook and yarn with her at all times, just incase she had a moment of sitting idle. She has completed several hand-quilted bedspreads for the grandchildren and had just mastered quilting by machine to create Christmas tree skirts for her girls. Most recently, during the Covid-19 pandemic lockdown, she began to make masks to give away to anyone that needed one. This original “Bag Lady”, lovingly teased as such for decades of never being without several cloth bags in tow, even made re-usable bags from old t-shirts for family, friends and to give the Bridgewater Public Library for their use. She loved to rhyme and found enjoyment in making up her own poems for the family, adding them to cards for that personal touch. Just this past summer she reignited her passion for genealogy and went back to what she had collected from 40 years ago. Life and raising a family had intervened, however, she knew exactly where those overflowing binders of family records were waiting for her and the next generation.

Marcella enjoyed baking and sharing it with everyone, but as her health began to limit her ability, her devoted husband Larry stepped in to do all she couldn’t do anymore. Over the years she challenged herself to make anniversary cakes and character shaped cakes for family members and relatives, having as much fun creating as they would in receiving and eating. When she moved into the Village of Greenfield in 1971, she started out making fudge with her mother-in-law’s help and before long she was sharing her sweet treat with businesses and friends as her holiday tradition began to form, one she would continue well into her later years, enlisting the help of her daughters when they became old enough stand at the hot stove and stir. She spent many summer and fall days helping the family with the garden and getting things ready for winter; veggies to haul and store, jams and pickles to be made. For years she worked with the Girl Guides Association, taught Brownies and helped out with every other level, attending provincial Girl Guide camps and was instrumental in forming the 1st NS Brownie Provincial Camp. She took any and all training she could to acquire the level she needed to do these camps, attending most provincial workshops in hopes of accumulating more guiding knowledge. She wasn’t much for public speaking but really enjoyed the Guiding Banquets so she empowered her brownies to take on the speaking roles and passed everything over to them. She canvassed locally for many charities; cancer, heart, kidney and MS to name a few, assisted in fundraising for all school functions and supported any fundraiser at the local Fire Hall with her donations of Auction items and baked goods. She tried to leave a trail of friendship wherever she had been.

Growing up in Crescent Beach she would pick berries and vegetables to sell to the summer beach cabin residents and her very first job was at a local Hennery gathering the eggs, washing and sorting them, driving the delivery truck and tending to the incubators where she would fondly remember a joyful sight; “to pull out a tray full of peeping chicks”. She later worked as a live in Housekeeper, tried her hand as a short order cook at both the Stedman’s and Metropolitan stores, and fondly recalls working at the Riverport Seafoods, travelling the LaHave ferry daily in her 1st pride & joy: a little green ‘65 Volkswagon Beetle, back when gas was only 50¢ a gallon.

Marcella grew up with a few animals over the years, several cats and a dog were the usual family pets, but when they had new chicks in the coop you could be sure to find Marcella inside with the heat lamp at her feet and the chicks on her shoulders. One year she kept one of the white roosters and gave him his own little house at the bottom of the hill and let me tell you, that was the best wannabe guard dog there ever was, and he only listened to Marcella.

Marcella was determined to try and stay ahead of her illness and put a smile on any face that she thought might need an uplift, always joking about being the Bionic woman when she received metal replacements and implants over the years for Hip and Knee surgeries. But then she was diagnosed with PAH and with that came Oxygen tubing and direct injection lines, there didn’t seem to be a nickname for that except “Survival of the Fittest” and she was dedicated to treatments and determined to survive, giving up was not in the picture. She was surrounded by love and fought a hard battle right until the end. She was able to make the most out of every day. She will be greatly missed by all who knew her.

Offer Condolence for the family of Joudrey; Marcella Diann