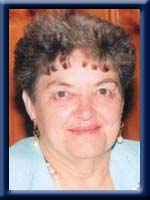 Born in Chelsea, she was a daughter of the late Dennis and Edith (Teale) Woodworth.

Joan worked housekeeping for Meadowbrook manor for a number of years. She enjoyed going to the beach, reading, and feeding the birds. She was a devoted member of the Kingdom Hall of Jehovah’s Witnesses and enjoyed sharing her faith with others.She will be greatly missed by her family of Jehovah’s Witnesses in Liverpool as well as all who knew her.

She was a devoted mother to her daughters Wanda (Nick) Freeman of Bangs Falls, NS and Brenda (Koen) Marinusse of Merritt, BC. and a cherished grandmother to Michael, Keith, Adrian, Hannah and Emily. She is survived by her sister Frances (Tom) Brake of Marystown, NL and brother Malcolm Woodworth of Chelsea and extended family Tallen (Miriam) Palmerit of Mexico, Kathy (Jim) Shindruk of New Glasgow, William Palmer of Bridgewater, David (Florence) Radlowsky of Calgary, AB. Karen Radlowsky (David Weaver) of Apsley, ON.

Cremation has taken place under the direction of Chandlers’ Funeral home, Liverpool, NS. Funeral service will be Thursday, February 16th, 2012, 2:00 p.m. at the Kingdom Hall of Jehovah’s Witnesses, Liverpool. Fred Campbell officiating. Burial will be in Maple Grove Cemetery, Chelsea.  In lieu of flowers, donations may be made to Canadian Cancer Society or the Watch Tower Bible and Track Society of Canada, PO Box 4100, Georgetown, ON  L7G 4Y4. Online condolences may be made to www.chandlersfuneral.com

Offer Condolence for the family of Joudrey; Ester Joan