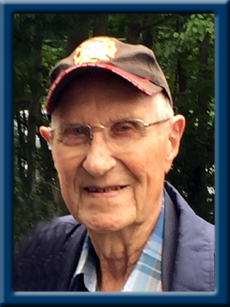 In memory of my Dad, Donald W. Joudrey, formerly of Liverpool, who passed away peacefully on June 29, 2021.
Born in Pleasantfield, Dad was a son of the late Randolph and Vernie (Lohnes) Joudrey.
Dad was a merchant seaman during World War II, a former employee with Bowater Mersey Paper Company Limited, Brooklyn, an honourary firefighter with Liverpool Fire Department and a former member of Mersey Branch #38, Royal Canadian Legion, Liverpool.
He is survived by his wife Judy (Hutchins)(Mooring) and his daughters Peggy of Vancouver and Darlene (David) Sewart of Dartmouth. His sisters Geraldine (Irvin) Ramey and Kathleene Henley, both of Bridgewater. Step sons James, Lundrigan of Mulgrave, Peter Lundrigan and Stephen Lundrigan, both of Hamilton, ON and Tommy Lundrigan of Victoria, BC.
Besides his parents, Donnie was predeceased by his first wife Joyce O. (Huskins); sister Marion Gardner, brother Harry, step son Richard Lundrigan.
Cremation has taken place under the direction of Chandlers’ Funeral Home, Liverpool, NS. At Donnie’s request, there will be no funeral service. No flowers, donations may be made to the family. Online condolences may be made to www.chandlersfuneral.com
Special thanks to his wife, Judy for her care of my Dad.

Offer Condolence for the family of Joudrey; Donald William