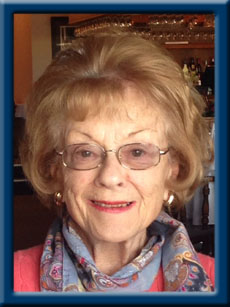 Jones; Helen Elizabeth, 91, formerly of Liverpool, and most recently Kentville, passed away peacefully at the age of 91 years in Valley Regional Hospital on August 4th, 2017.
Born on October 31st, 1925 in Liverpool, Helen was the only daughter of Clifford and Henrietta (Troop) Day. It made every Halloween in her life, and ours, an extra fun and special time.
Helen attended school in Liverpool and later at “the Mount” in Halifax from 1939-1945. Mom would often tell us stories of watching the ships, from campus, in Bedford Basin as they formed up the many convoys in support of the war effort. After the war, she moved to Toronto where she followed in her father’s footsteps and worked in the offices of the Glidden Paint Company for a time. She enjoyed life in and around Toronto with her girlfriends and had a flat in Bloor West Village. When she returned to Liverpool, she re-acquainted with and became engaged to Bev Jones who over her childhood years lived just up the street. In March of 1949 they were married. Together Helen and Bev raised three sons, Grenville (Gail), Christopher of Liverpool and Andrew, Calgary. Along with her three sons, Helen leaves her grandchildren Lisa and Rebecca of Canning and Centreville and Lidia and Marisa of Calgary. She is also survived by Zachary, Ronan, Drake, Bailey, Grace and Lucy.
During her years in Liverpool, she and our father refurbished the historic Bradford Cottage at 16 Main Street which dated from 1767. They decorated it with Nova Scotia pine furniture and glass as well as other local collectibles and antiques. She loved to spend time in the garden too and we well remember a bed that was always brimming with dahlias. Mom was a great cook and loved to entertain. She also fully embraced the making of all kinds of pickles and preserves and our home took on an elevated bustle at harvest time. Helen also devoted much of her time to Trinity Anglican Church and Queens General Hospital.
Along with a buoyant social life in the Bowater Mersey Paper Co. world of the 60’s and early 70’s, our parents, and we boys, enjoyed life on Ponhook Lake at the cottage. Those long summer days were greatly cherished. Many family get-togethers with Joneses, both local and from as far away as California, as well as regular visits from other cousins- Harlows, Troops and Crosbies are still remembered; as are times spent with their many friends who also visited.
Helen loved Liverpool and Queens County with its people, its distinct south shore culture and its beautiful natural environment. She explored its many corners with Bev, and we kids, and those simpler times remain as some of the most cherished of all. She, as did our father, greatly relished their many friendships that were formed over the years in Liverpool, as well as throughout the time of retirement when the family home transitioned to the seashore in Hunt’s Point.
Helen, who was the last member of the family in her generation, was a very spirited, well-dressed and principled lady every day of her life. Comments from her care providers over more recent years were always recognizing this.
Predeceased besides her parents, were her husband R.G. Beverly (Bev) Jones, who was her great joy and love in life, who passed in 1996 as well as her only brother C. Randolf (Randy) and his spouse, Beryl (Bradshaw).
Cremation has taken place under the direction of Chandlers’ Funeral Home, Liverpool. Funeral service in memory of Helen will be held Saturday, October 7th, 2017 at 11:00 a.m. in Trinity Anglican Church, Liverpool. Reverend Judy Cross officiating. Reception to follow in the church hall. Interment will be in Trinity Anglican Cemetery. Online condolences may be made to www.chandlersfuneral.com
The family wishes to thank the staff at Kings Riverside Court, Kentville where she resided for 6 lovely years, followed by a brief stay at Wedgewood House, Kentville under excellent care. Her final 10 months were spent at the Blomidon Court Shannex in Greenwich. In addition to the fine care at the above-mentioned residences, we offer special thanks to medical staff, including Drs. Sinclair and Targett, the Kentville Dental Centre and especially the staff of the Emergency Ward at Valley Regional Hospital on the night of August 5th.

Offer Condolence for the family of Jones; Helen Elizabeth