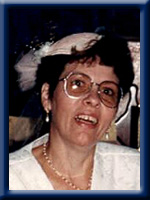 JOLLIMORE- Vivian Elsie Anna, 71, of Western Head, Queens County, passed peacefully into God’s arms, July 21st, 2011, at home .
Born in Mersey Point, she was a daughter of the late Raymond Harold and Ena Beatrice (Levy) Greek.
Before her stroke, Vivian loved being active. She and her husband Jordie travelled and attended many country music concerts. She was an accomplished seamstress and a member of the Mersey Branch Royal Canadian Legion, Ladies Auxiliary, Liverpool. She will be fondly remembered as a wonderful wife, mother, grandmother and friend.
Vivian is survived by her loving husband Jordan, daughters Debbie Godfrey of Port Medway, Susan Verge (Doug Stevens) of Milton; sons Kevin Verge of Liverpool and Danny (Selena) Verge of Mersey Point. Grandchildren Kimberley, Meagan, Jeremy, Kyle, Connor, Cami, Ainsley and Bowen and great grandson Kaeleb. Her sisters Evelyn (Rudy) Mallett of Mersey Point and Judy Himmelman of Sandy Cove. Her special friends Cathy Brennan and LeeAnn Daury.
She was predeceased by brothers Vincent and Donald, cousin Rosalind and nieces Marianne and Pammie.
Visitation will be Monday, July 25th, 2011 from 7 until 9 p.m. and funeral service will be Tuesday, July 26th, 2011 at 11:00 a.m. both from Chandlers’ Funeral Chapel, Liverpool. Reverend Oland Kent officiating. Cremation to follow. No flowers by request. Donations to the Fabry’s Association of Nova Scotia c/o Dr. Michael West, Halifax, NS. Online condolences may be made to www.chandlersfuneral.com

Offer Condolence for the family of Jollimore; Vivian Elsie Anna