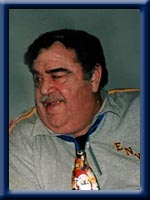 Born in Liverpool, he was a son of the late John “Johnny” Earl and Gladys (Penney) Jollimore.

Sydney lived most of his life in Toronto working for Canada Packers before starting his own roofing business. He moved back to Liverpool in 1982 where he worked as a general contractor. He was a member of the Mersey Branch #38 Royal Canadian Legion, Liverpool, where he also tended bar. He especially enjoyed hockey and coaching the kids. He loved his children and grandchildren.

He was predeceased by his brothers: Earl, David, Norman, Phillip, Ronnie, Donny and Nelson.

Cremation has taken place under the direction of Chandlers’ Funeral Home, Liverpool where funeral service will be Sunday, December 13th, 2009 at 7:00 p.m., followed by a reception. Family flowers only, donations may be made to Queens County Minor Hockey Association or the Queens General Hospital Foundation. Online condolences may be made to www.chandlersfuneral.com

Offer Condolence for the family of Jollimore, Sydney Ford