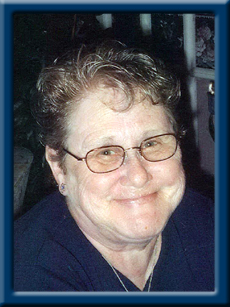 JOLLIMORE – Josephine D., 74, of Western Head, Queens County, passed away peacefully on Wednesday, August 2, 2017 in Queens General Hospital, Liverpool.
Born on June 4, 1943 in Mersey Point, she was a daughter of the late Raymond and Florence (Freeman) Jollimore.
Josephine was employed with New System Dry Cleaners, Queens General Hospital, Mersey Seafoods, People’s Department Store, Top Hat Dry Cleaners, sold Avon and was co-owner of Queens Extended Home Care Service until her retirement in 1996. She was a life member of the Ladies Auxiliary, Mersey Branch #38, Royal Canadian Legion, Liverpool. She enjoyed doing volunteer work, playing darts, making crafts, cake decorating, gardening and spending time with her family.
She is survived by her daughter Janice-Lee Jollimore (Todd Laing) of Bridgewater; her son Jeffery Jollimore of Milton, her grandchildren Alexander Wamboldt and Jared Wamboldt, her sisters Janet Jollimore of Mersey Point and Judy Theriau of Hunts Point; her brothers James (Jane) of Conquerall Bank and Jordan (Cathy) of Milton. One niece and three nephews.
She was predeceased by her brother John “Jack”.
Cremation has taken place under the direction of Chandlers’ Funeral Home, Liverpool, NS. A graveside memorial service will be held Sunday, August 6, 2017 at 2:00 p.m. in Zion United Cemetery, Payzant Street, Liverpool. Family flowers only, donations may be made to the Heart and Stroke Foundation. Online condolences may be made to www.chandlersfuneral.com

Offer Condolence for the family of Jollimore; Josephine Delores