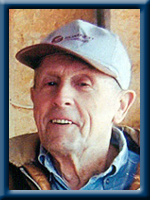 The family of Edson Lloyd Johnson, of Bridgewater, would like you to know that he passed away on February 23, 2015 at the age of 99 years in Queens General Hospital, Liverpool.
Born in Danesville, Queens County on July 2, 1915, he was the son of Edgar and Susan Johnson.
In his many years of living, dad saw and experienced enormous changes. As a young man, he remembered bringing home game and picking berries for the table. His father championed a school in Danesville and dad graduated from there with what was then grade ten. He was a good student who enjoyed reading and was good at math. He later went on to complete his grade 12 G.E.D..
He learned much from his father who was a carpenter and used those skills to earn much of his living. But, before that time, he, like many or most others of his time, worked in the woods for logging companies. At times, he became the cook in camps and used his marksmanship to add to the food for the tables. He never went without employment and worked at building companies in Liverpool, Hebbville, Bridgewater, Halifax, Cape Breton, Pictou and Labrador. He went where there was work and became one of the best workers, learning along the way to become a craftsman. He later taught himself how to use a lathe and his children and his grandchildren have many pieces of his wood work in their homes.
In later years, he was fortunate to travel with his children and saw/visited every province and territory in Canada; many numerous times. He took, with his family, a two week trip to Great Britain that included a week aboard canal boats that went through parts of England and Wales and a week on Holy Island, in Northumberland County, England and from there he travelled by train through parts of Scotland.
He travelled through all of the New England States and many of the Western and Southern parts of the USA visiting the Red Wood Forests, the Grand Canyon, Reno, Las Vegas, the Golden Gate Bridge, rode the trolley cars of San Francisco, had a quick trip into Mexicali, Mexico, visited Boot Hill and saw an enactment of the Shoot Out at he OK Corral in Tombstone, AZ.
In later years, he enjoyed numerous family gatherings, firemen’s breakfasts, various suppers, card games and being warmed by the firewood he had split and put inside his home for the winter.
He was active in the Middlewood United Church and served many years as an Elder. The inside and outside of the church has many examples of his skills as a woodworker. For example, he made the fleur-de-lis that sits atop the steeple and he and his sons put it in place. He also made the window frames including the large one at the back of the choir loft.
He had six children. Margaret (Lee) Nauss, Melba (Bruce) Holm, Monte Edson (Linda Wilson), Glenda (Philip) Bolliver and Jeffrey (Mike Williams). He also had nine grandchildren and eight great grandchildren.
He was predeceased by his wife Alice (Sarty), both of his parents and siblings: Sister Blanche and brothers Clifford, Eli, Zenus, Stanley, Guy and Lester. He was the last remaining member of his family.
Cremation has taken place under the direction of Chandlers’ Funeral Home, Liverpool. A memorial service will be held at a later date at the Middlewood United Church followed by refreshments in the church hall and a private interment. Many thanks for the care provided to Dad by Dr. Woodford, and the staff of Queens General Hospital. Memorial donations may be made to Middlewood United Church. Online condolences may be made to www.chandlersfuneral.com

Offer Condolence for the family of Johnson; Edson Lloyd