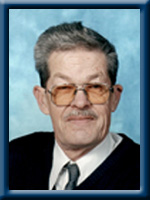 JOHNSON – Armond C., 78, of Brooklyn, Queens County passed away peacefully on Sunday, May 8th, 2011 at home.
Born in Danesville, he was a son of the late C. Clifford and Hazel M. (Whynot) Johnson.
Armond was well known as a hard worker. He was a school bus driver and a driver for Irving Oil. He was a former employee with Corbettt’s Gun and Tackle. In his spare time he enjoyed walks in the woods, hunting, fishing and working in his yard.
He is survived by his daughter Carol (Andrew) MacLeod of Hammonds Plains; stepdaughter Jane Warner (Bill Roy) of Brooklyn, stepson Stephen Jollimore (Tabitha Flood) of Brooklyn 7 grandchildren and 12 great grandchildren. His brothers Gardner (Joan), Algar, Clifford (Donna), all of Brooklyn and Norwood of Maitland Bridge.
He was predeceased by his wife Helen (Whynot)(Jollimore) Johnson.
Cremation has taken place under the direction of Chandlers’ Funeral Home, Liverpool, where visitation will be held prior to memorial service from 1:00 until 2:00 p.m. and memorial service will be at 2:00 p.m. on Friday May 13th, 2011. Chaplain Donald Lawton officiating. Burial will be in Greenwood Cemetery, Port Medway. Family flowers only, donations may be made to any charity. Online condolences may be made to www.chandlersfuneral.com

Offer Condolence for the family of Johnson; Armond Charles