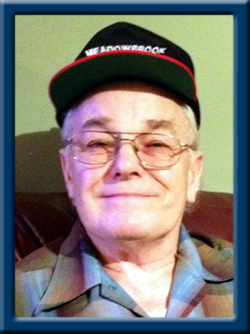 JOHNSON – Algar Edgar, 77, of Brooklyn, Queens County, passed away peacefully in Queens General Hospital Liverpool on Saturday, August 20, 2016.
Born in Liverpool, he was a son of the late Charles and Hazel (Whynot) Johnson.
Algar was a former employee with Bowater Mersey Paper Company Limited for over twenty five years and drove school bus. He enjoyed working with cattle on his farm and working in the woods as well as gardening.
He is survived by his daughter Lynn (Danny) Roy of Port Mouton; his sons Murray (Heather Everett) of Brooklyn, Randy (Cathy Davis) of Liverpool, Avery and Rockey (Lorei Leonardo) both of Halifax. Grandchildren Nathan, Zachary, Mitchell, Miranda, Brandon, Emily and Dakota and great grand children Leila, Camryn, Trinity, Alexis, Madison and Cassidy. His brothers Clifford (Donna) of Brooklyn and Norwood of Maitland Bridge and many nieces and nephews.
He was predeceased by his brothers Gardner and Armand.
Cremation has taken place under the direction of Chandlers’ Funeral Home, Liverpool, NS. A private family graveside service will be held at a later date. No flowers by request, donations may be made to the Canadian Cancer Society or to a charity of your choice. Online condolences may be made to www.chandlersfuneral.com. Algar’s family wish to thank the nurses at Queens General Hospital, Queens Home Support, Palliative Care and Dr. Gunn for their continued compassionate care shown to Algar during his battle with cancer.

Offer Condolence for the family of Johnson; Algar Edgar