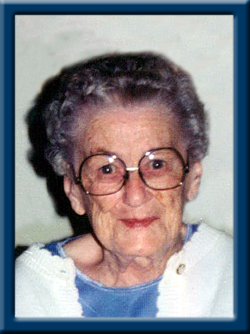 Jennings – Agatha Louise, 99 of Hebb’s Cross, Lunenburg County, passed away peacefully on Thursday June 9th, 2016 in South Shore Regional Hospital, Bridgewater, NS.
Born in Liverpool, she was a daughter of the late John and Louise (Gross) MacDonald.
Agatha worked in the laundry department of Queens General Hospital, Liverpool and the former Dawson Memorial Hospital, Bridgewater for a number of years. She loved flowers and will be fondly remembered as a hard worker and loving mother who always put her children first.
Agatha is survived by her daughters; Rosely (Michael) Ward of Hebb’s Cross; Charlotte Jollimore of Liverpool; Paula (Tony) Zinck of Bridgewater; Marion Benoit of Hemford Forest; Shirley (Donald) Slauenwhite of Wileville; her son John of Hebb’s Cross ; 15 grandchildren, 15 great grandchildren and a number of great great grandchildren.
Agatha was predeceased by her husband Lester; daughter Norma; son Maynard; grandsons Gilbert, James, Douglas and Peter; granddaughters Lynn, Gail and Karen; sisters Marguerite, Marion and Dorothy; half sister Betty Smart; brothers Donald, Malcolm, and Bruce ; half brothers; Lealand, James and Joe Cunningham.
Visitation will be this evening (Monday, June 13, 2016) from 7 until 9 p.m. in Chandlers’ Funeral Home, Liverpool, NS. Funeral service will be Tuesday, June 14, 2016 at 2:00 p.m. in Trinity Anglican Church, Liverpool. Reverend Judy Cross officiating. Burial will be in Trinity Anglican Cemetery, Liverpool. Family flowers only, donations may be made to Canadian Cancer Society or to Lunenburg Home Support. Online condolences may be made to www.chandlersfuneral.com.

Offer Condolence for the family of Jennings; Agatha Louise