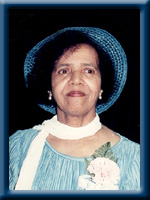 JARVIS-CHASE; Grace Ann, 84, of Liverpool,, passed away peacefully on Sunday, May 1st, 2011 in Queens General Hospital with her family by her side.
Born in Liverpool, she was a daughter of the late James and Lottie (Morrison) Jarvis.
Grace was a private housekeeper for a number of families in the Liverpool area. She loved to play cards and the video lottery terminals hoping to “strike it lucky”. She loved to dance especially tap-dancing. She will be fondly remembered as a loving mother and grandmother with a tough spirit and for her selfless giving. “She may not have had much, but what she had, she was willing to give.”
She is survived by her daughters: Marilyn (Bruce) Williams of Dartmouth, Betty Anne Moreau and Charlotte Chase, both of Halifax, Olive Chase (Richard Chevarie) of Liverpool. Her sons: Richard (Corina) of Liverpool and John (Carol) and Peter “Sonny” (Lina), both of Toronto.
19 grandchildren, 30 great grandchildren and a great-great grandson. Her sisters: Jenny Clattenburg (Robert Whynot) of Milton, Margaret Ford of Halifax, Evelyn McIntyre of Lower Sackville. Her brother Harold of Middlefield.
She was predeceased by her son Tony, sisters: Elsie, Edna, Kay, Doris, Helen, Marion and brothers George, James, Wilfred, Billy and Clayton.
Cremation has taken place under the direction of Chandlers’ Funeral Home, Liverpool, where the funeral service will be held Saturday, May 7th, 2011 at 11:00 a.m. Reverend Steven Hopper officiating., Burial will be in Zion United Cemetery, Payzant Street, Liverpool. Family flowers only, donations may be made to the Canadian Cancer Society. Online condolences may be made to www.chandlersfuneral.com

Offer Condolence for the family of Jarvis-Chase; Grace Ann