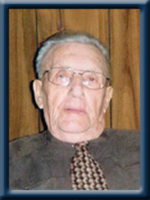 Born in Beech Hill, he was a son of the late Robert and Cesaire (Blaney) Inness.

Jordan grew up on the family farm working long hard hours, living a simple life style. He left his young family at home and entered the Merchant Marines in WWII (1941 – 1945). Crisscrossing the Atlantic on dangerous convoys, Jordan witnessed much tragedy on these voyages. Upon returning from the war he worked on several ships including the Markland as a marine engineer. After that, he was employed with Irving as an engineer on their boats (1962 -1966). He then returned home and was employed as a hydro engineer with the Nova Scotia Power Commission for twenty two years, retiring in 1988. Jordan always had a love for horses and the outdoors, but above all else Jordan was most passionate about his family and spending time with them.

A Celebration of Jordan’s Life will be held on Thursday, May 5th, 2016, at 1:00 p.m., from Chandlers’ Funeral Home, Liverpool, followed by a reception. Father Keith Billard officiating. Burial will be in St. Gregory’s Catholic Church Cemetery, College Street, Liverpool. Family flowers only. Donations may be made to St. Gregory’s Catholic Church. To share memories or condolences, please visit www.chandlersfuneral.com

Offer Condolence for the family of Inness; Jordan Omer