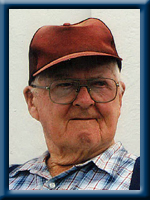 Huskins, Winston Churchill “Wink”, 92, of Summerville, Queens County, passed away on Tuesday, April 28th, 2015, at his home.
Born in Summerville, he was a son of the late Bertram and Carrie (MacGowan) Huskins.
Winston was a WWII veteran stationed at the Garrison in Halifax. He was a carpenter by trade and eventually formed his own construction company building many of the homes and cottages in the surrounding area. When he wasn’t working at carpentry, he enjoyed fishing for lobster and built two of his own boats. He also loved gardening in the summer and until the last few years, spent many hours in his garden. Winston was a member of the Summerville Christian Church serving as a deacon for many years and devoted many hours of his time to the upkeep of the church. He will be fondly remembered as a loving husband and father.
He is survived by his loving wife of 71 years, Helen (Sarty); daughter Cathy (Peter) Fralic, of Hampton, New Brunswick; sons, John (Mary), of St. Albert, Alberta, Kevin (Jennifer), of Summerville; daughter in law, Jacqueline, of Summerville Centre; grandchildren, Kim, Derek, Mark, Ian, Shane, Justin; step grandchildren, Chelsey, Mike; great grandchildren, Brittany, Brooklyn, Shane; sister, Ruth Fiander, of Liverpool; many nieces and nephews.
He was predeceased by a son, Gary; grandson, Ryan; sisters Barbara, Connie; brothers, Harris, Gerald and Curtis.
Cremation has taken place under the direction of Chandlers’ Funeral Home, Liverpool. A Celebration of Winston’s Life will be held on Saturday, May 2nd, 2015, at 11:00 a.m., from Chandlers’ Funeral Chapel, Liverpool, followed by a reception. Pastor Russell Prime officiating. Family flowers only. Donations may be made to the Summerville Christian Church or to the Queens General Hospital Foundation. Online condolences may be made to the family at www.chandlersfuneral.com

Offer Condolence for the family of Huskins; Winston Churchill