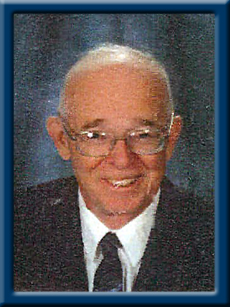 HUSKINS –  Lyman E.,  79, of Milton, Queens County, passed away peacefully on Saturday, March 24, 2018 in Queens General Hospital, Liverpool.
Born in Milton, he was a son of the late Lemuel and Vesta (Oliver) Huskins.  Lyman is survived by his wife of 54 years, Marilyn (Eisner), his daughter Patricia (Kendall) Isnor of Middle Sackville; his son Larry (Sarah) of Carpinteria, CA; his grandchildren Nathaniel Isnor and Vivian Huskins.
Lyman was a graduate of Liverpool High School and the Nova Scotia Land Survey Institute in Lawrencetown. Over his career, he was employed with Nova Scotia Power, Stevens and Fiske Construction, Water Resources Branch of the Federal Government and finally with Bowater Mersey Paper Company for over 25 years where he retired from the Engineering Department as Manager of Properties.
During his younger years Lyman was a member of the Air Cadets and Boy Scouts and loved playing various sports (Liverpool Larrupers Baseball team). He was involved in his children’s sport activities and spent many years helping with minor hockey.  The family always went camping every summer and he was a member of the Seabreeze Campers. Lyman also enjoyed hunting, fishing and watching sports.  He appreciated family time with his children and later with his grandchildren. Following his family’s tradition, he valued spending time working in the woods.  He and his wife, Marilyn, liked square dancing and were members of the Jolly Rogers and the LaHave River Ramblers. He was also a member of the Milton Christian Church where he served as a deacon.
Cremation has taken place under the direction of Chandlers’ Funeral Home, Liverpool. Funeral service will be held Saturday, March 31, 2018 at 11:00 a.m. from Milton Christian Church, Milton, NS. Reverend Russell Prime officiating. Reception to follow.
The family wishes to thank the doctors and nurses at Queens General Hospital for their care and kindness. In lieu of flowers, donations may be made to Milton Christian Church or to the Queens General Hospital Foundation.

Offer Condolence for the family of Huskins; Lyman Everett