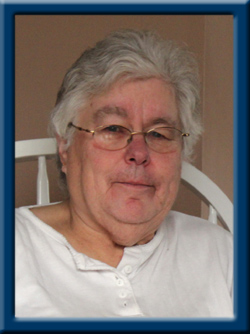 HUSKINS – Jacqueline Marie “Jackie”, 71, of Summerville Centre, Queens County, passed away peacefully in Queens General Hospital, Liverpool on Saturday, December 10, 2016.
Born in Liverpool, she was a daughter of Randolph West of Hunts Point and the late Margaret (Smith) West.
Jackie will be fondly remembered for her devotion to her family, especially her husband Gary and her granddaughter Brittany as well as her cooking, baking, knitting and her “fur babies”.
She is survived by her daughter Kim (Craig) Hupman of Hunts Point; her son Derek (Rachael Dyer) of Halifax; her granddaughter Brittany; her brothers Brian (Susan) of Comox, BC; Michael (Donna) of Conquerall Mills; Jeff (Shelly) of Fall River; Paul (Line) of Comox, BC; Lawrence of Shelburne; Richard (Heather) of BC.
She was predeceased by her husband Gary.
Cremation has taken place under the direction of Chandlers’ Funeral Home, Liverpool where a memorial service will be held Wednesday, December 14, 2016 at 11:00 a.m., Reverend Karen Ohrt officiating. Reception to follow. A private family burial will take place at a later time. Family flowers only, donations may be made to the Canadian Cancer Society, the Wesley United Church, Hunts Point or to a charity of your choice. Online condolences may be made to www.chandlersfuneral.com

Offer Condolence for the family of Huskins; Jacqueline Marie “Jackie”