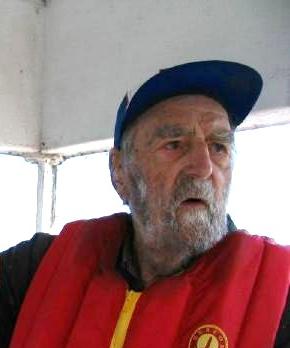 Harvey “Leonce” Huskins, 88, of Central Port Mouton and formerly of Lunenburg, passed away at the Queens General Hospital on Wednesday, May 12, 2010.

Born in Port Mouton on February 8, 1922, he was the youngest son of the late Alexander and Addie (Doggett) Huskins.

He worked as a laborer  until he joined the Army in 1942. He went overseas the following year, serving with the Princess Louise Fusiliers at Aldershot, England for three years. He was a member of good standing of the Royal Canadian Legion Branch #23, Lunenburg. Upon leaving the Army he returned to Port Mouton where he was a fisherman and then soon took up the job of Lighthouse Keeper.  He kept the light at Little Hope; Spectacle Island in Port Mouton Bay for seven years and finally Battery Point in Lunenburg which he kept for 25½  years until his retirement.  During his time in Lunenburg he helped establish the local chapter of the Marine Auxiliary Coast Guard.

He enjoyed fixing lawn mowers & outboard motors, fishing, talking with friends, watching the Blue Jays and music. He often played with other local musicians.  He played the guitar, mouth organ and a little accordion; his favorite piece of music was a hymn called “Mountain Railroad”.   For many years he was a part of the world of CB radios, being a member of several clubs, as well as attending a multitude of C.B. Campouts over the years.

Cremation has taken place and there will be no service by request.  Memorial donations may be made to the Royal Canadian Legion Poppy Fund or the Lunenburg Veteran’s Unit.

Offer Condolence for the family of Huskins, Harvey Leonce