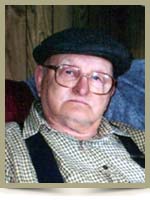 Born in Beech Hill, Queens County, he was a son of the late LeRoy and Lucy (Smith) Huskins.

Bruce was a school bus driver for over 33 years, during this time he also worked in the local fish plants as a handyman / carpenter. Bruce enjoyed woodworking, raising cattle, gardening, hunting, fishing and spending time at his camp. Later in life he enjoyed the company of his dogs Reubin, Muffin and Rosie.

He was predeceased by his wife Olive; brothers George and Arnold.

A private family graveside burial will be held at a later date. No flowers by request. Donations may be made to the Queens Manor, Liverpool. Online condolences to the family may be made at www.chandlersfuneral.com

Offer Condolence for the family of Huskins; Bruce Horne