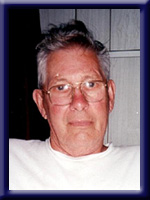 Hurshman, Morris James “Scrubb” – passed away peacefully May 5, 2010 at the Queens General Hospital in Liverpool in his 83rd year.

Born in Brooklyn, Nova Scotia on April 16th, 1928, he was a son of the late James and Mildred (Zwicker) Hurshman.

He served 27 years in the Canadian Armed Forces and was a veteran of the Korean War. Morris loved country music, Hank Snow being his favorite.

He was predeceased by his daughter Jane and son Douglas.

Visitation will be held Friday May 7th, 2010, from 7:00 – 9:00 p.m. at Chandlers’ Funeral Home, Liverpool. A Funeral Service will be held Saturday, May 8th, 2010, at 2:00 p.m., from Trinity Anglican Church, Liverpool. Reverend  Donald Lawton officiating. Donations may be made to the Canadian Diabetes Association. Online condolences may be made at www.chandlersfuneral.com

Offer Condolence for the family of Hurshman, Morris James