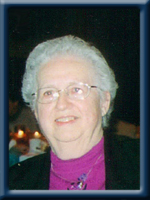 Hupman, Lorraine Minnie, 82, of Summerville Centre, Queens County, passed away peacefully on Saturday, April 16th, 2016, in Queens General Hospital, Liverpool.
Born in Mill Village, she was a daughter of the late Frederick and Hazel (Phalen) Connolly.

She was predeceased by her loving husband, Aubrey “Clair” and her son-in-law, Roger Thibault.

Lorraine was an Elementary School Teacher for 13 years prior to becoming the Municipal Office Tax Clerk until her retirement in 1992. In 1993, she became a Municipal Counselor representing the District of West Queens until its amalgamation with the town of Liverpool creating the region of Queens in March of 1996. Lorraine enjoyed her volunteer work which included canvassing for the Canadian Cancer Society, member of the Queens Manor Auxiliary and most importantly, her 35 years of music leadership as the Church Organist and Choir Director for the Summerville Christian Church.

Visitation will be held from 7:00 – 9:00 p.m., on Tuesday, April 19th, 2016, at Chandlers’ Funeral Home, Liverpool. A Funeral Service will be held on Wednesday , April 20th, 2016, at 11:00 a.m., from Summerville Christian Church, followed by a reception. Reverend Russell Prime officiating assisted by Reverend Neil Bergman. Burial will be in the Laurel Hill Cemetery, Port Mouton. Family flowers only. Donations may be made to the Summerville Christian Church or to the Queens General Hospital Foundation. To share memories or condolences, please visit www.chandlersfuneral.com

Offer Condolence for the family of Hupman; Lorraine Minnie