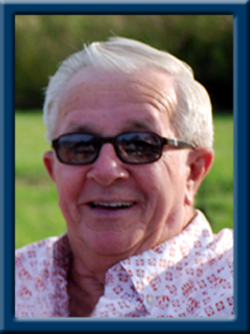 HUPMAN- George Clarke, 79, of Summerville, Queens County, passed away Tuesday, July 28, 2015 in Queens General Hospital surrounded by his loving family after a lengthy battle with lung disease.
Born August 1, 1935, he was a son of the late Wilbert and Dorothy (Clarke) Hupman.
In his younger days, George spent many years as a forester with his dad. After time spent on the Mersey Ships, he joined the Canadian Coast Guard. Dad made eighteen trips to the Arctic during his 25 years with the Coast Guard. After leaving the ship to be home with his family, he worked at Mersey Seafoods. Upon retiring, he took on many hobbies; building model boats, gardening, tinkering with anything with “moving parts”, but his favorite past time was time spent with his family whom he loved dearly. He had a love for music and singing. Being faithful to the Summerville Christian Church, he enjoyed singing in the choir and helping out in any aspect of the church. Being a practical joker, he loved to make people laugh. His greatest passion was his family.
He is survived by his loving wife of sixty years Elaine (Hatt); sons Lorimer (Evelyn) of Eagle Head, Michael (Anne) of Summerville; Philip of Summerville; daughters Irene (David) Lawson of Summerville; Susan Fisher (John Fralic) of Beech Hill; The best grampie in the world to Kandi (Darren) Blinn; Kimberly (Jeremy) Anthony; Hannah (Dana) Hupman; Heidi (Michael) Metcalfe; Nicole (David) Clowater; Lisa (Scott) MacDonald; Sarah (Cory) Hupman; Craig (Shania) Hupman; Amber Fisher (Jamie); Jeremy (Sara) Fisher and Bradley Fisher. Very proud great grampie of Sidnee and Emma Blinn; Dawson and Levi Anthony; Maggie and Molly Nash; Benjamin Metcalfe; Leanne Potter; Owen and Madison Merry; Liam Hupman and Jordan McKinnon. Brothers Gladwin “Nick” of Comox, BC; Robert “Bob” of Liverpool and Elmer of Ontario.
He was predeceased by his sister Elsie Veinot.
Cremation has taken place under the direction of Chandlers’ Funeral Home, Liverpool. A private family graveside service will be held at a later date. Donations may be made to the Summerville Christian Church, the Queens General Hospital Foundation or to a charity of your choice. Online condolences may be made to www.chandlersfuneral.com

Offer Condolence for the family of Hupman; George Clarke