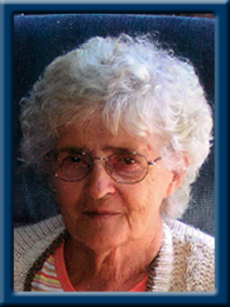 HUPMAN – E. Lorraine, 89, of Summerville Centre, Queens County, passed away peacefully in Liverpool on Tuesday, December 25, 2018.
Born in Hartford, Conn., she was a daughter of the late Meredith and Ruth (Payzant) Wagner and, at the age of nine months, Lorraine and her family moved back to Nova Scotia.
Lorraine worked at White Point Beach Lodge in her earlier years and later with C.W. McLeod Fisheries in fish processing. She enjoyed cats and dogs, knitting, sewing, playing cards, especially 45’s as well as baking and cooking for her family.
Lorraine is survived by her daughters Clara Scott of Shelburne; Cathy (Arthur) Anthony of Port Mouton; her son Cecil (William Ryter) of Summerville Centre. Her grandchildren Andrew Scott, Will Scott (Christin Pitre), Jeremy (Kim) Anthony; Matthew (Hollie) Anthony; Kayleigh (Jasper) Lunn and 10 great grandchildren. Her sisters Miriam (Benny) Fisher of Southwest Port Mouton; Donna (Niels) Rasmussen of Cole Harbour; Cheryl (Bob) Hatt of White Point; sister in law Audrey Wagner and her special “grand dog” Finley.
Lorraine was predeceased by her husband Arthur and her brother Eugene.
Cremation has taken place under the direction of Chandlers’ Funeral Home, Liverpool. Funeral service will be held Sunday, December 30, 2018 at 1:00 p.m. in Chandlers’ Funeral Chapel, Liverpool with reception to follow. Burial will be in Laurel Hill Cemetery, Riverhead Road, Port Mouton. Family flowers only, donations may be made to SEVA Canada, Queens Branch S.P.C.A., Queens Manor, Liverpool or the Canadian Cancer Society. Online condolences may be made to www.chandlersfuneral.com
The family wish to thank the nursing staff on Nursing West, Queens Manor for their continuing care of Lorraine.

Offer Condolence for the family of Hupman; E. Lorraine