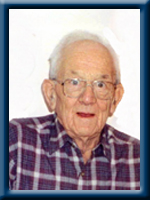 Born in Summerville Centre, he was a son of the late Aubrey and Mildred (Davis) Hupman.

He was the head greens keeper at the Liverpool Golf and Country Club and the ice maker for the the Liverpool Curling Club for many years. Clair took great pride in his property and enjoyed the country life style, especially if it had anything to do with raising steers or any other animals. He was known for his abilities as the family story teller and was always happiest when he was surrounded by his loving grandchildren and great grandchildren. He was a member of the Summerville Christian Church and the Royal Canadian Legion, Branch #38, Liverpool.

He was predeceased by son in law Roger Thibault; sisters Amy Lawson and Betty Trimm.

Visitation will be held from 7:00 – 9:00 p.m., on Monday, November 18th, 2013, at Chandlers Funeral Home, Liverpool. A Funeral Service will be held on Tuesday, November 19th, 2013, at 11:00 a.m., from Summerville Christian Church, followed by a reception. Reverend Neil Bergman officiating. Burial will be in the Laurel Hill Cemetery, Port Mouton. Family flowers only. Donations may be made to the Summerville Christian Church or to the Queens General Hospital Foundation. Online condolences may be made to the family at www.chandlersfuneral.com

Offer Condolence for the family of Hupman; Aubrey “Clair”