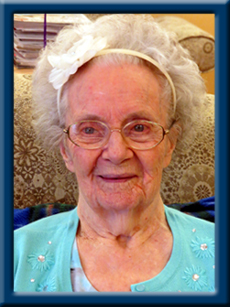 Born to Laura and Lawrence Leeco, Olive – or “Ollie” as she was known by many – grew up in the rural areas of southern PEI, primarily in Kilmuir. She often recounted fond memories of skating and square dancing from those days. Following her marriage to Murdoch Bruce of Heatherdale, PEI, they took up residence in Nova Scotia and started a family; living first in Wolfville and then settling in Liverpool. Following the death of her first husband, Olive – a stay-at-home mom – entered the workforce, eventually settling in for a number of years as office manager for Mersey Seafoods Ltd. A few years later she met and married Colin Hunt and moved the family to Greenfield, NS, where she lived until just a few years ago. Those years in Greenfield brought many adventures into her life, especially travelling to different parts of the country and the world. Olive was very involved in community and church activities, and was a lifetime member of the Order of the Eastern Star. She loved to collect butterfly memorabilia, teapots . . . and hugs.

Family left to mourn include daughters Joanne Wellwood (Doug) of Belnan, NS, and Louise Bruce of Charlottetown, PEI; step-daughter Jill Hunt of Dartmouth, NS; granddaughters Kim LeBlanc (Paul) of Belnan, NS, and Jenny Wellwood (Mark Stevens) of Eastern Passage, NS; great-grandchildren Victoria LeBlanc, Brandon LeBlanc, and Drew Stevens; step-great-grandson Tyler Stevens; sisters-in-law Mary MacKinnon of Montague, PEI, and Louise Mutch of Kilmuir, PEI; and several nieces and nephews. She is also survived by a number of step-children and their families, and nieces and nephews, in the Hunt family. Olive was predeceased by her parents, both husbands, her brother Bruce Leeco, and a number of in-laws from both marriages.

Cremation has taken place under the direction of Chandlers’ Funeral Home, Liverpool, NS. There will no visiting hours or funeral service at this time. Burial will take place at a later date on Prince Edward Island. Olive was proud to be a Nova Scotian, but her heart never fully left PEI and that is when she longed to return at the end of her days. “Once an Islander, always an Islander.” Online condolences may be made to www.chandlersfuneral.com.

The family wants to express a very special note of appreciation to nurse Nicole for her tender, loving care throughout her stay at the Magnolia, but especially during the last few weeks.

If you wish to do something in memory of Olive, the family suggests you plant some flowers in your garden this spring that will attract the butterflies she so enjoyed; and, when the butterflies appear, know that she is still with us in spirit.

Offer Condolence for the family of Hunt; Olive Edith