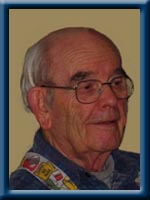 Born in Bridgewater, he was a son of the late Ray and Dorothy (Joudrey) Hubley.

Frank was a former member of the Royal Canadian Army Corps discharged in 1944 due to medical reasons. He was a former employee for Bowater Mersey Paper Company and worked as a machinist until his retirement in 1986. He was a member of Zion United Church in Liverpool as well as the Liverpool Curling Club.

He is survived by his wife of  45 years A. Phyllis (Legge); his stepdaughters Jean Nauss of Bridgewater and Heather Whynot of  Liverpool. Stepson Maynard Hartlen of Port Alberni, BC. 9 step grandchildren and 14 step great-grandchildren. Sister-in-law Muriel Hubley of Bridgewater.

He was predeceased by an infant sister and brothers Douglas and Eric.

Funeral service will be held Monday, March 8th, 2010 at 11:00 a.m. in Chandlers’ Funeral Chapel, Liverpool. Reverend Richard Bristo officiating. Burial will be in Zion United Cemetery, College Street, Liverpool Family flowers only, donations may be made to Queens General Hospital Foundation. Online condolences may be made to www.chandlersfuneral.com

Offer Condolence for the family of Hubley; Frank Wilson