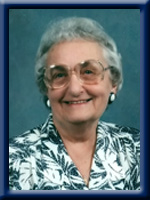 Born in Black Point, Queens County, she was a daughter of the late John and Emma (Mason) Boutilier.

Evelyn worked most of her life as a clerk at the old Metropolitan Store and as a bookkeeper for Irving Oil. She was a past treasurer for the Grace Anglican Church ACW, and also a former member of the  Liverpool Home & School Association. Evelyn had many hobbies such as gardening, quilting, crocheting, and she was also very good at sewing and knitting as she also knitted  for the Red Cross  and made surgeon’s jackets during WWII.

Visitation will be held Tuesday, September 28th, 2010, from 7-9 p.m., at Chandlers’ Funeral Home, Liverpool. A Funeral Service will be held Wednesday, September 29th, 2010, at 2:00 p.m., from Trinity Anglican Church, Liverpool. Reverend Judy Cross officiating. Burial will be in the Trinity Anglican Cemetery, Liverpool. Family flowers only. Donations may be made to the Nova Scotia Heart and Stroke Foundation or to the Canadian Diabetes Association. Online condolences may be made at www.chandlersfuneral.com

Offer Condolence for the family of Hubley; Evelyn Orilla