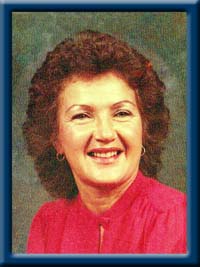 Howles – Lorna Victoria, 82, of Halifax, passed away Tuesday, June 23, 2015 in the Halifax Infirmary, QEII.
Born in Liverpool, she was a daughter of the late Robie and Cora Foster.
Lorna worked for the Nova Scotia Registry of Joint Stock Companies. She enjoyed dancing and supplementing her closets and travelling.
She is survived by her daughter Brenda Reid (Jamie Hughes), Pugwash; her son Blair Wentzell (Victoria) of Burnaby, BC.; grandchildren Hilary and Jessica; great grandchild Jack; her sisters Irene Sarty of Liverpool; Annabelle Manning of New Jersey; her brothers Raymond Selig and Ernest Selig, both of Port Medway; Wilson “Buddy” Selig of New York.
She was predeceased by husbands Barry Howles and Vincent Wentzell.
No visitation by request. Funeral service will be held at a later date. In lieu of flowers, donations may be made to the Canadian Institute for the Blind or the Alzheimer Society of Nova Scotia. Online condolences may be made to www.chandlersfuneral.com.

Offer Condolence for the family of Howles; Lorna Victoria