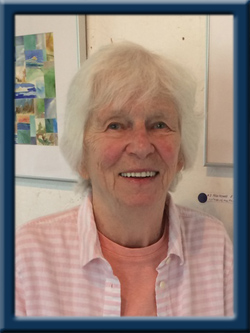 Rita left us December 16th, 2019. And while her passing leaves a great void for those who knew her, it is tempered with the gratitude that we have been able to know this extraordinary and remarkable woman.

A native New Englander, she grew up in pre-war Connecticut. During the 1950’s, she moved to New York City to study acting while supporting herself as a commercial artist. Appearing on and off-Broadway, it was the lead role in ‘Little Mary Sunshine’ that really launched her career. The production ran for more than three years before she came to Canada in 1962. So began a career on stage and screen that lasted nearly five decades and made Rita something of a legend in theatre circles. From Stratford to the Neptune in Halifax she appeared on major stages from coast to coast. Playing everything from musicals to drama and comedy, she took on roles that she found challenging and illuminating.

Rita settled in Port Medway in the late 1980’s. And while her professional career had been as an actress, she never let go of her talents as an artist. Whether on the road or at home, there were always watercolours within reach and a jar of paint brushes waiting to be used.

Never one to sit idle….. she was an avid scrabble player, a tennis fan, gardener, a baker, master cook and hostess. She was an animal lover and devoted to her pets. She was D.I.Y. personified, with a complement of tools to build and fix just about anything. She was indeed quite the lady!

We get a peek at her sense of humour in a quote from the program for the 1968 Spring Thaw Review (which toured Canada from coast to coast). When asked about her association with the movies she replied:
“My father always said – ‘you keep going to those movies and they’ll warp your mind’. I think he was right – twice a week I got warped – but what else could a girl do on a Saturday night when her hobby at 14 was carpentry? And that’s how I got into Show Biz.”

Rita was predeceased by her sister Clare, her brother John, her partners, Marianne Bohdanetsky, and June Blewett.

A Celebration of the Life and Art of Rita Howell will be held in Port Medway in the spring 2020.

Make voyages! – Attempt them!- There’s nothing else…

Offer Condolence for the family of Howell; Rita Marie