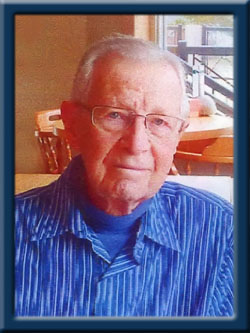 Born March 10th 1931 in Hamilton, John completed his BA at Wheaton College, MA and post-grad doctoral studies at Northwestern University before embarking on his career as an educator. He joined the University of Waterloo in 1961 shortly after its inception and spent the next 35 years as a professor in the School of Environmental Studies, specializing in urban and regional planning. John was active for many years in the Oxford University exchange program and a leader of the Pragma Council think tank. He continued his involvement with both U of W and Pragma as an advisor for many years after his official retirement in 1996. He was revered by his students as a man of wisdom, care and compassion.

John had a lifelong passion for athletics. He wooed his future wife on the tennis courts and loved to ski, golf and took up hockey in his late 40’s. John and Norma also shared a love for travel and spent many years skiing in Vermont and golfing in South Carolina. Life was scheduled around Hamilton Tiger Cats games, you did not visit while a game was on. A true fanatic, if you listen closely you will hear  Pigskin Pete joining him in an Oskee Wee Wee cheer. This torch has now passed to David, be yours to hold it high!

In December 2010, having lived all their lives in the Kitchener Waterloo area, John and Norma embarked on a new adventure and moved to Liverpool NS when Stewart and Cheryl and their family moved there. A new passion developed for them with a deep fascination and attraction to the sea. The daily contact John and Norma shared with children, grandchildren and great grandchildren during his final years were truly special. The opportunity not so long ago to enjoy a family round of golf with four generations is a precious memory.

As a Christian, John’s life was rooted in his fundamental belief in Christ. For many years John and Norma were members of the Lincoln Road Chapel in Waterloo. In living his life he did not preach at people but he did minister to them. His was the voice of reason, kindness, caring, compassion, thoughtfulness and forgiveness. His glass was always half full, not half empty. He rarely if ever complained, was slow to anger and never held a grudge. Most importantly he knew how to laugh. There was always a twinkle in his eye, mischief in his heart and laughter on his lips. Having learned at the foot of the master, his legacy is three generations who now tease each other mercilessly, laughing and giggling while loving each other unconditionally. We have been truly blessed to have loved him and been loved by him.

Dear God on High hear our prayer
His days are spent, he’s served you well
Though sad we may be, his time has come
Please take him now, to rest at last in peace with thee.

A memorial service will be held on Friday, October 20th, 2017, at 2:00 p.m., from Chandlers’ Funeral Home, Liverpool. Reverend Dr. Steven Hopper officiating. A celebration of his life will also be held in Kitchener Waterloo on a date to be determined and published in the future.

The family would like to extend special thanks to Dr. Mogan, Dr. Ernest, the nurses and staff of Queens General Hospital for their kind and compassionate care.

In lieu of flowers, memorial donations to the Queens General Hospital Foundation would be appreciated.
Online condolences may be left at www.chandlersfuneral.com

Offer Condolence for the family of Horton; John Thornton