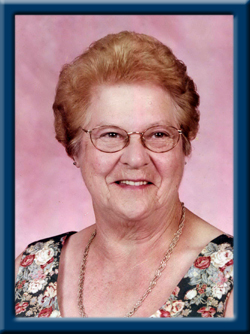 HOLDRIGHT – Marguerite Claire, 87, of Maitland Bridge, Annapolis County, passed away peacefully in Queens General, Hospital, Liverpool on Saturday, August 13, 2016 with her daughters by her side.
Born September 21, 1928 in Devonshire, Queens County, she was a daughter of the late John and Annie (Coade) Carver.
Marguerite worked for the Department of Fisheries and Oceans as a fish tagger and as a seasonal janitor for Kejimkujik National park and as a cook for the Conservation Corps. She was a member of St. Paul’s United Church in Maitland Bridge and a member of the UCW. She was an active member of the Maitland Bridge Community Hall and was a recipient of Volunteer of The Year Award.
She is survived by her daughters Lucy (Wilfred) Ringer and Elaine (Raymond) Kempton, both of Kempt and her sons John (Doreen) of Kempt and Max (Myra) of Maitland Bridge. 9 grandchildren and 9 great grandchildren. Her sister Althea Rowter of Middlefield.
Marguerite was predeceased by her husband Hector, her grandson Christopher Holdright, her sisters Dora Mills, Zora Mills, Lurleen Carver, Beulah Cashman, Jean Seldon, May MacBride, Helen Mooers and Pauline Wamboldt and her brothers Kenneth and Edward.
Visitation will be Wednesday evening, August 17, 2016 from 7 until 9 p.m. in Chandlers’ Funeral Home, Liverpool. Funeral service will be Thursday, August 18, 2016 at 2 p.m. in St. Paul’s United Church, Maitland Bridge. Reverend David Lutes officiating. Burial will be in Maplewood Cemetery, Maitland Bridge followed by a reception at the Maitland Bridge Community Hall. Family flowers only, donations may be made to North Queens Fire Association or the North Queens Medical Centre, Caledonia. Online condolences may be made to www.chandlersfuneral.com

Offer Condolence for the family of Holdright; Marguerite Claire