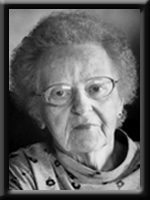 Holdright, Lillian Gertrude—96, of Caledonia, Queens Co., passed away peacefully in Queens General Hospital on March 4, 2010. Wife, mother, grandmother, great-grandmother, and friend to all who knew her, she will be fondly remembered and sadly missed. Born in Lake May, she was the daughter of the late Leland  and Laura (Carver) White. She married Hazen Holdright in 1934 and spent her life devoted to her family, first on the farm in Maitland Bridge, later moving to the lakeside home in Caledonia. She is survived by her daughters, Ila Lee (Joe) Baxter, Vancouver; Jocelyn (Larry) Smith, North Brookfield; her sons, Glenford (Freda), Caledonia/Florida; Roger (Linda), Orleans, Ont.; Louis (Joan), Hebbville; sisters, Mildred Fader, New Germany; Erna Stewart, East Port L’Herbert; brother, Lorimer, Annapolis Royal; grandchildren, Heather, Wendy, Jeff, Chris, Janet, Dan, Jason, Jeff, Aaron, Tammy, Krista and Kainan, along with several great-grandchildren. She was predeceased by her husband, Hazen; her son, Seyward; sister, Phyllis; brothers, Wilson, Howard, Ralph and Donald. Visitation will be Sunday, March 7th, 2010 from 7 until 9 p.m. in Chandlers’ Funeral  Home, Liverpool. Cremation to follow. A graveside memorial service will be Wednesday, March 10th, 2010 at 2:00 p.m.  in Maplewood Cemetery, Maitland Bridge with Reverend John Boddy officiating. Family flowers only, donations in Lillian’s memory may be made to Maitland Bridge Community Hall or North Queens Fire Department. The family wishes to thank the many people who have meant so much to Lillian over recent years, homecare workers, doctors and nurses of the Caledonia Medical Centre and the Queens General Hospital, Liverpool, and her many friends and neighbors. Online condolences may be made to www.chandlersfuneral.com.

Offer Condolence for the family of Holdright; Lillian Gertrude