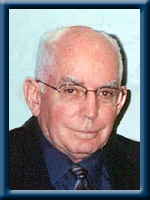 Born in Newmarket, ON, he was a son of the late William and Anne Hillaby.

Paul graduated from Newmarket High School where he was an exemplary mathematician and avid athlete in football, track and especially hockey. He supported his children in their love of soccer. He served in the Canadian Navy for 23 years achieving the rank of Sergeant. Paul travelled the country and the world with his military career and his post military careers. He lived with no regrets and accomplished almost everything he put his mind to.  He will be remembered and respected.

He is survived by his wife Sheila Rae (Smith); his sons Andrew (Janice) and Clark, grandchildren Kaley and Kirk, brother Bruce (Judy) of Horsefly, BC. Sister in law Jean Hillaby of Ottawa.

He was predeceased by a sister Mildred and brother William “Bill”.

Cremation has taken place under the direction of Chandlers’ Funeral Home, Liverpool.  A graveside memorial service will be held Saturday, January 31, 2015 at 11:00 a.m. in Highland Cemetery, Caledonia.  No flowers by request, donations may be made to Meadowbrook Manor, South Brookfield. Online condolences  may be made to www.chandlersfuneral.com

Offer Condolence for the family of Hillaby; Paul David