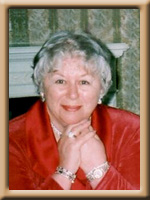 Born in Liverpool, she was the oldest daughter of the late Lawrence and Verna ( Modeste) Stafford.

Jean was a well known landscape artist, having studied art at St. Mary’s University and in Europe. She was a military wife and lived all over Canada and Europe before retiring to Indian Point with her husband Charles in 1981. She enjoyed playing bridge, golfing, sailing, taking cruises, and entertaining.

She is survived by her son Larry (Linda) Herbin of Bridgewater; daughter Karen Aerssen of Chatham, ON; sister Deanna MacDonald of Wolfville.

She was predeceased by her husband Charles Andrew Herbin.

Cremation has taken place under the direction of Chandlers’ Funeral Home, Liverpool. A funeral service will be held Wednesday, March 31st, 2010, at 11:00 AM, from St. Gregory’s Catholic Church, Liverpool; Father Brian Murphy officiating. Burial will take place at St. Gregory’s Catholic Cemetery, College Street. In lieu of flowers, donations may be made to the Nova Scotia Heart and Stroke Foundation. Online condolences may be made at www.chandlersfuneral.com

Offer Condolence for the family of Herbin, Mary “Jean”