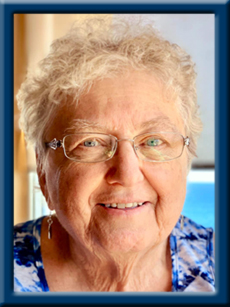 Joan Muriel Henderson (nee Mills) passed away peacefully in the early hours of Tuesday, July 6th in the emergency department of Queens General Hospital in Liverpool, NS in her 73rd year. She left on her own terms with Howard, Tammi and Krista by her side, surrounding her with all their love.
Joan was born on February 27, 1948 in Liverpool and was the sixth child of the late Muriel Evans (nee Allen) and the only child of the late Joseph Mills of Milton, NS. Born under the sign of the fish (Pisces) she had a life-long love of the water. Growing up on the banks of the Mersey, she spent her childhood swimming in the river and always found herself happiest when spending time at the family cottage in Labelle on Ponhook Lake or taking drives along the coast with those she loved.
After completion of the secretarial course at Liverpool Regional High School she worked as a Payroll Clerk at Liverpool’s Town Hall. It was there that she met Howard. An employee with Maritime Tel & Tel (later Aliant) he had been called to fix a telephone line which required him to crawl under her desk. In the process, he accidentally burned her with his soldering iron and that was the beginning of their nearly fifty years together. Joan always joked that he had “branded her for life”.
After marrying in Milton on November 27, 1971, they moved to Great Hill where they still lived. In 1973, they welcomed their first daughter, Tammi, and then in 1976, completed their family with the arrival of their second daughter, Krista. Joan believed her second career, that of motherhood, was the best one of all. Perhaps her proudest promotion was to that of Nanny when the family grew to include five grandchildren. She was so grateful for each of their presences in her life and her love for them was undeniable.
Her family and friends meant the world to her. She loved spending time with her three sisters who lived locally and all of their extended families. Many, many hours were spent playing bingo or cards and they all enjoyed laughing together until their faces hurt. She enjoyed travelling to visit many of them in Alberta and British Columbia over the years and had the opportunity to visit Canada from one coast to the other when she and her daughters visited Newfoundland together a few years ago.
She was a Red Hatter, a Ham Radio Operator with callsign VE1QCL (Queens County Lady) and was the founder of the local online forum, Queens Connections. All of these groups gave her the gift of lifelong friendships, many adventures and more importantly many laughs. She loved shopping and over the years enjoyed many trips to Bangor and more recently was still able to enjoy this pastime with the arrival of Amazon. She dabbled in genealogy, liked quiet time spent putting puzzles together, loved to read, was a fantastic knitter and crocheter and had a well-known eye for scenic photography.

She made the best potato salad. She had the best penmanship. She somehow managed to always find the perfect gift for someone. She had the loudest laugh of anyone in a room. She never passed up a bowl of lobster chowder or a slice of Howard’s homemade brown bread. Her favourite sandwich was a toasted tomato one with mayo and salt and pepper. Lupins were her favourite flower and she’d exclaim “Look at all the lupins!” whenever she saw them to the point the girls now exclaim it in her voice when they see them, too. She would skunk you at crib and still somehow make you feel like you won. She was always frustrated by the fact she could never “do anything with this damn hair” – if it was straight, it wasn’t curly enough and if it was permed, it was too curly.
She had the uncanny ability of clapping on the off-beats and sang just enough off-tune that you never mentioned it her. She loved to sing along to songs but often forgot most of the words until the very last one of every line and then would belt that one word out for all she was worth. If she got a song stuck in her head, she’d sing it for days on end until it was now stuck in your head, too. If you were in a car with her, she’d narrate every single sign you encountered. She had a quick temper and swore like a sailor, and we loved her despite and because of both.
Most importantly, she loved her people fiercely and with her whole heart. She took on the title of honourary second mom to many of the girls’ best friends over the years, with great pride. She believed in loving everyone unconditionally and that everyone deserved more than one second chance. She cried at the drop of a hat because she wore her heart on her sleeve, always.
If asked to describe her in one word, that word would be generous. She was generous with her love, her time and her support. She was always there with an encouraging word, to offer a solution to a problem, or to just lend an ear when you just needed someone to listen. She gave you her whole self when you were in her company. There was only one version of her – what you saw was what you got – and we all loved her for that authenticity.
Joan was able to stay at home throughout her medical challenges because of Howard’s love and devotion. His vow of “in sickness and in health” was the most important vow they shared and he held up his end of that deal until the very end. He put her needs first and when she needed his support, he made sure she had it – helping her through everything in every possible way he could. When she could no longer drive he made sure she got to spend time by the ocean, going for drives after dialysis and enjoying all the beauty of the seaside which she loved photographing. He’s lost his partner in crime, his “Miss Daisy” to chauffeur and while he was always the quiet one of the two, we know his world is much quieter without her in it.
Joan is survived by her husband of nearly 50 years – Howard Henderson of Great Hill; her eldest daughter, Tammi (Adam Hayne) and their boys Luke and Kyle of Eastern Passage; her youngest daughter, Krista (Brad Cleator) of Liverpool and her children, Rogan Naugler (Sarah Mossman) of Kingsburg, NS, Rylan Naugler (Josh Bourque) of Kentville, NS and Riston Thorbourne of Liverpool as well as her sister, Rita Dagley of Liverpool, NS. She was predeceased by both of her parents as well as her siblings, Marion Schwartz, George Evans, Dorothy Uhlman and Ann Glawson.
The family would like to extend their heartfelt thanks to the staff of the Emergency Department of Queens General Hospital for their compassionate care that allowed her to pass peacefully and in comfort and to the staff at Chandler’s Funeral Service for their support and guidance during the grieving process. While Joan navigated the challenges of high blood pressure, Diabetes and kidney failure for many years, we are eternally grateful for the seven additional years dialysis gave us with her and wish to extend our love and thanks to the staff of Queens General Hospital’s Dialysis Unit and the many doctors and specialists who provided care to her over the years.
She is now free from the burdens of her illnesses. She has regained her freedom. She’s earned her wings. She now flies with the other dragonflies.
Cremation has taken place under the direction of Chandlers’ Funeral Home, Liverpool, NS. A celebration of Joan’s life will take place on Monday, July 12th from 6:00pm-8:00pm at Tupper Park in Milton. All are welcome. We ask that if possible, you bring a lawn chair, a face mask and an item for a potluck supper. Joan loved enjoying potlucks in Tupper Park so we think this would be a fitting way to send her off and share memories of her time with us. Please visit www.lifebythesea.ca for more details.
If you would like to remember Joan through a donation to a charity, she would have loved for you to support Diabetes Canada or the Kidney Foundation.

“I’ve got a good mother
And her voice is what keeps me here
Feet on ground, heart in hand
Facing forward, be yourself”

Offer Condolence for the family of Henderson; Joan Muriel