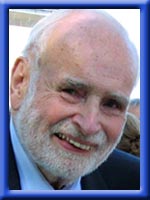 Eric Hazeldine – of Liverpool, Wolfville and Venice, Florida, died peacefully in Kentville, NS, surrounded by his family on Feb 13, in his 92nd year, after a brief illness which weakened his body but never his sharp mind and wit. Eric was born in 1918 in Rottingdean, England.  He was the son of the late Thomas and Natalie (Howitt) Hazeldine.

During WWII he served with the Royal Engineers in India and Burma and was mentioned in Dispatches. In 1946 he, “Boy”, married Ruth, “Scamp”.  He worked in East Africa after the war as Chief Mechanical Engineer on the Groundnut Project. Upon returning to England he designed and built over 20 gas and electric cars, known as  the “Hazelcar”. Sixty years later, one is still in use in England and others in museums.

In 1952, he immigrated to Canada to work as an engineer at Bowater Mersey Paper Co, Liverpool. His career spanned 32 years, retiring as Mill Manager. He was actively involved in Liverpool’s community and headed many organizations such as: Kiwanis, Red Cross, Assoc for the Mentally Handicapped, Children’s Aid Society, and as District Commissioner of Boy Scouts.

After retiring in 1982, Eric and Ruth traveled extensively. Life was divided between Nova Scotia and Venice, Fl. Eric was an integral member of Kings Gate Club, having designed, built, managed, created and led various projects. He lived life to the fullest with his soul mate and true love.

The celebration of Eric’s “Awesome Life” will be held at 2:00 p.m. Thursday, February 18, 2010 in the White Family Funeral Home, Kentville with Rev. Robyn Brown-Hewitt officiating. Reception following at the funeral home. Donations in memory may be made to the Heart and Stroke Foundation of N.S. On-line condolences or inquiries may be directed to chandlersfuneral.com  or to www.whitefamilyfuneralhome.com.

Offer Condolence for the family of Hazeldine, Eric