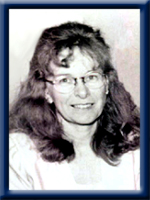 Born in Halifax, she was a daughter of the late George and Marion (Burgess) Nickerson.

Jean was a former clerk for Sears Canada and Zellers and  later was doing data collection for TSN. She enjoyed walking, swimming, canoeing, camping and writing. She loved spending time with her family especially her grandchildren.

She is survived by her husband of 48 years Robert “Mitchell’; her daughters Karla (Bill Travis) of Halifax and Lori (Tony) Walters of Timberlea, her son Andre (Michelle Dennis) of Sarnia, ON., her grandchildren Megan, Adrian and Leah Walters, Makayla Gallagher and Parker Hatt.  Her sister Judy Benjamin of Halifax.

She was predeceased by her brother Richard.

Visitation will be Friday, November 15, 2013 from 7 until 9 p.m. and funeral service  will be Saturday, November 16, 2013 at 11:00 a.m. , both in Chandlers’ Funeral Chapel, Liverpool.  Bishop Ryan Fraser officiating. No flowers by request. Donations may be made to the Canadian Cancer Society.  Online condolences may be made to www.chandlersfuneral.com

Offer Condolence for the family of Hatt; Jean Marion