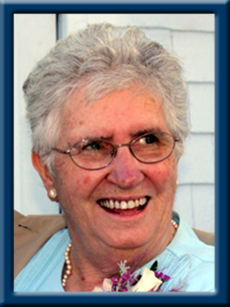 It is with profound sadness that we announce the passing of Helen Effie Hatt of Milton. Helen peacefully passed away on 21 June 2020 at the Queens General Hospital in Liverpool.
Helen was born in Milton as the eldest and the only daughter of the late Winslow and Jenny (Hatt) Hatt of Milton and was raised in a family with four brothers.
Married on the 23 October 1953, she became the wife and devoted partner of Gerald E Hatt. It was because of their love and devotion that they were able to enjoy a relationship of 67 years and raise a family of six children. Helen’s greatest passion in her life was her family. It was through her loving and nurturing ways that she became the sage mentor and role model to all her children. Over the years she developed a strong relationship to both God and her religion. She was an active member and a Sunday school teacher of the Pilgrim United Church located in Brooklyn, Queens County. Also, she was a devoted member of the Order of Eastern Star where she was able to attain the position of Worthy Past Matron of Arbutus Chapter, #30, OES, Milton, NS. Some of Helen’s hobbies were her craft work, puzzles, and going for walks. She was also a caring and devoted friend to many, and one of her great pleasures in life was getting together with friends to play Rimouli. Helen was also a clerk working in Seldon’s Drug Store for many years.
Helen is survived by her beloved husband Gerald and her six children: Janice (Doug) Baker, and Daniel (Patti), Stephen (Zona), Michael (Donna), Gregory, Jeffery (Andrea) Hatt. She leaves behind her 11 grandchildren: Christina, Derrick, Melissa, Tracie, Benjamin, Jenilyn, Jonathan, Stephen, Nicholas, Christopher, and Samuel. She also leaves behind 13 great grandchildren and 2 great, great grandchildren. She is also survived by brothers, Allan (Marnie) and Gary (Agnus) as well her sisters-in-law Pauline and Rita.
Besides her parents, Helen was predeceased by her infant granddaughter Jacqueline Baker and brothers Robert and David.
Cremation has taken place under the direction of Chandlers’ Funeral Home, Liverpool, NS. No flowers, donations may be made in her memory to the Nova Scotia Heart and Stroke Foundation or to the Children’s Wish Foundation. Online condolences may be made to www.chandlersfuneral.com.
Helen’s family wishes to give thanks to both Dr. Gary Ernst and Dr. Ryan Burrill, and to the nursing staff at Queens General Hospital for the exemplary care provided to her.

Offer Condolence for the family of Hatt; Helen Effie